"The best thing someone can say to me is that while watching my performance they began to cry. It is not important to understand what I am doing; perhaps it is better if they don't understand, but just respond to the dance." Kazuo Ohno 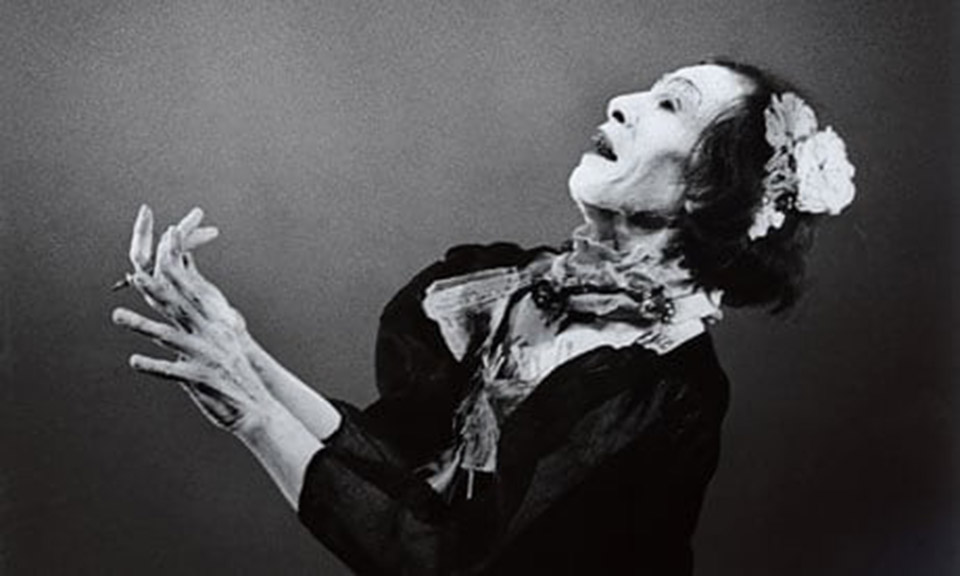 Kazuo Ohno met Tatsumi Hijikata in the 1950s and was inspired by the latter to begin cultivating Butoh (originally called Ankoku Butoh, the "Dance of Utter Darkness"). During the 1960s, Ohno sought his own style... In 1977, Ohno premiered his solo Butoh work directed by Hijikata, "La Argentina Sho" (Admiring La Argentina), which was awarded the Dance Critic's Circle Award. In 1980, "Admiring La Argentina" is Kazuo's masterpiece as well as Butoh's.With Hijikata directing, he created two more major works, "My Mother" and "Dead Sea", performed with Yoshito Ohno. Other works of Ohno's include "Water Lilies", "Ka Cho Fu Getsu"(Flowers-Birds-Wind-Moon)and "The Road in Heaven, The Road in Earth". As one of the most significant Butoh performers, Ohno has toured throughout Europe, North and South America, Australia and Asia. Many students have come to study under him from all over the world. In 1993, at the age of 86, Kazuo Ohno was interviewed at his home by the NHK director Toru Fukui. What begins as a straightforward question and answer session, quickly develops into Ohno addressing the concerns that he has asked himself throughout his long career. Ohno's stream of words encapsulates a philosophy of life and his approach to dance, and ultimately, his steadfast conviction that dance and life are but one. We will show the full length interview! After his 90th birthday, he was still active as a Butoh dancer. The last overseas performance was "Requiem for the 20th Century" which was held in New York on December 1999. But in the same year he had eye trouble and his physical strength gradually started waning.Yet Kazuo Ohno has continued dancing as if he was nourished by his age. When he could not walk by himself, he danced with the supports by others. When he could not stand even with the supports, he danced as he seated himself.  When his legs didn't move as he wanted, he danced with his hands. When he lost himself, he crawled on his knees and audience were so moved by watching his back.