BOWO - a body without orgasm 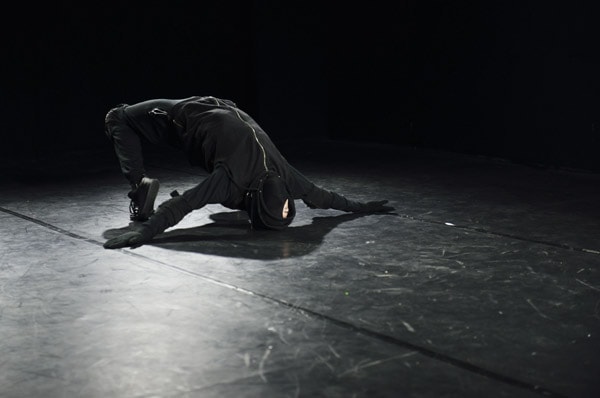 How do you make yourself a body without organs?

BOWO is a provocation, a process, a diffculty, a cell, a visual action. BOWO is energy, informal sublimation.
BOWO is partially free.
BOWO goes through repetition, it is a matter of identity, an organized working system, a scary anarchic revelation, movement of the space, the thought in the duration, intuitions escaped from the vital and unavoidable organs, partial castration of the pure pleasure, landscape of current utopias, unrepresentable and revealing themselves.

The sound research expressed in the music by JD Zazie is part of an investigation that relates to space and to the choreographic origin of an organic body, real or metaphoric, but transformed and abstracted in a different language through repetition, silence and many recorded and improvised subtle moments of a continuos dialogue.
The work reacts like an installation to a specifc space, based on movement and sound performed live in time and space. Its actual duration takes 30 minutes, but it has been performed for two hours in an open space and so it's duration can vary depending on the conditions.
The dialogue between visual language and sound follows the research on the subject, as a vocabulary used to create a unique sequence of intensities, coherent with a rhizomatic vision of the action, in which every point of view can change and move with us, trying to understand the rules of a different democratic vision of reality that crosses utopia, revolution and anarchism without any heroic attitude.
The audience enters the space in which sound and movement are in action and decide how to accept or not this 'second level of reality' in which its own presence affects the development of the work. They receive a list of short instructions that invite people to choose between some suggestions and to feel free to move in the space, or even dance and interact with the performers. Simple costumes, prothesis, covers of the organic body are offered to the audience in order to invite them to participate to this process.
The objective is not focused on the result but on the research, on finding a coherent strategic approach to reconstitute a post structuralist vision.

Example of simple instructions:
DURING THE PERFORMANCE YOU CAN
change your position in the space
lie down
repeat yourself or myself
vocabulary
I will do it better than you
let the machine go on
be the most active audience member