A story told with sarcasm and empathy about power, utopia and death against the background of the terrorism of the 70s. 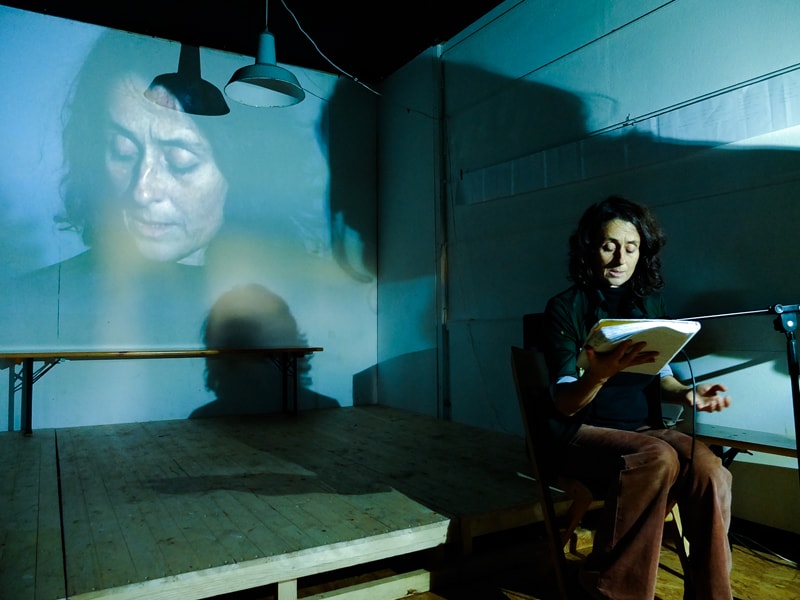 On about 200 pages, more than 100 voices narrate the events of the German Autumn in a loose sequence of scenes. A crazy look at history that uses the German-Italian mirroring to make rhetorical veils visible and to search for today in the fog of the past. Italian and German actors of different generations play in and with German language and history and with everything that translation means. They jump back and forth between narration and play, interpret and improvise. The guiding principle remains the foreign gaze and the actors' handling of historical figures, which are put on and taken off like gloves that are tried on and soon changed again. Partly read, some only alluded to, for a form of play that moves between Brecht, Totò and the Happening.As if to create the atmosphere of a typical Italian plenum, where the long political discussions are always accompanied by leisurely eating and drinking, after the six-hour performance a small, tasty Italian dish is enjoyed together with a glass of wine.

With »Materials for a German Tragedy« Antonio Tarantino won the prestigious Riccione Prize for Contemporary Drama in 1997. This giant snapshot of the 1977 wave of terror is being performed in Germany for the first time. Author Tarantino explains, »I didn't want to write about the Brigate Rosse because these events are too close to us, both politically and emotionally.« In his dissociation from written history, Tarantino creates a theatrical in-between space in which language can emancipate itself and thus manifest its rhetorical and subversive potential.

In this merry-go-round, the young utopians, the terrorists, are only monologuing monuments of forlornness. The institutional rulers they challenge seem all the more like caricatures the more their language formulates the discourse of power. The result is the distorted image of a state that refers just as well to the 1970s as to our present, in which both the techniques of concealing reality and the life-and-death struggle between state power and terrorism have assumed unimagined proportions. Power always remains true to itself.

An experiment with language, history and changing perspectives with an ensemble that mixes stars of the Berlin performance scene like Lajos Talamonti (from the performance collective Interrobang) and Armin Wieser (Hans Werner Krösinger and others) with Italian actors (Lea Barletti, Carlo Loiudice) and German-Italian border crossers like Werner Waas (direction/acting), Elettra de Salvo (acting) or also Barbara Weigel (video/dramaturgy). In addition, there is a musician from the team of »Martin Clausen und Kollegen«.

In the course of the rehearsals, two workshops were completed, which enriched the work with intergenerational reflections and interjections. On the one hand with pupils of the 10th grade of the Italian-German Albert-Einstein-Oberschule in Britz and on the other hand with older people in cooperation with the Theater der Erfahrungen in Schöneberg. The reflections of those who experienced these years and those who were not yet born at that time were integrated and incorporated into the rehearsal process.

A production by ITZ Berlin in the framework of »Fabulamundi.Playwriting Europe - Crossing Generations«.
With the support of the Cultural Program »Creative Europe 2014 - 2020« of the European Union, the Co-financing Fund of the Berlin Senate for Culture and the Italian Cultural Institute.