»You're a 44. Don't let that get you down. The result is temporary. 58 points more happyness are still waiting for you. You just have to train it. Happy fighting!« 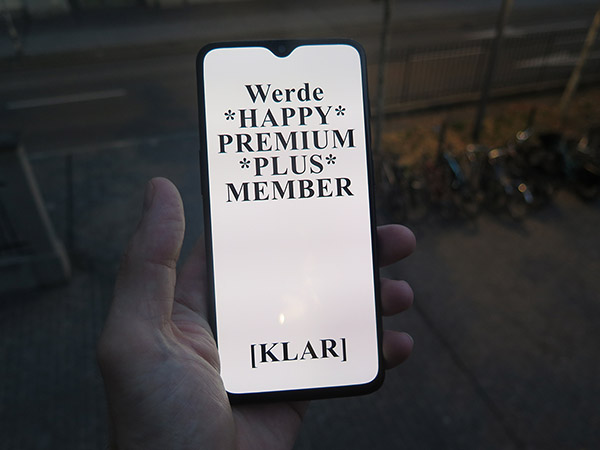 In his research Benjamin Burger gets to the bottom of the industrial promise of happiness - a prototype.

The performative prototype »Happily Ever After« is a spin-off from the ongoing research project »Happy Points«. In it, Benjamin Burger conducts a self-experiment to get to the bottom of the performance society's promise of happiness. His goal is to become 100 points happy.

»A person who feels good is a good person. A person who feels bad is a bad person« is how philosopher Eva Illouz describes the paradigm of the »happiness dictatorship«. Behind this brutal logic is an industry for which the perception of happiness is a resource. It surfs on the promise that everyone in capitalism is the architect of their own happiness. Conversely, however, everyone is also the architect of their own unhappiness. Happiness and unhappiness are thus merely a question of one's own performance. The Happify app, which was developed with the help of happiness researchers and positive psychologists, also promises that personal happiness can be trained. Happy Fitness. In exercise programs, it holds out the prospect of an ever-improved, even happier self. The app is an expression of a technocratic worldview, for which everything, including one's own psychological feelings, can be programmed. And indeed, the app bluntly promises that negativity is just an evolutionary programming error and that we can reprogram ourselves for happiness. All of this is strongly reminiscent of motifs from cyberpunk novels, in which neuronal psycho-hacking is an everyday occurrence. Personal happiness is technology.

The app gave Benjamin an initial assessment based on a questionnaire: 44 points happy. Of course, Benjamin wanted to refuse it at first. But then the scary thing for him was that this number, this 44, felt so accurate. He would have described himself as not particularly happy but not deeply unhappy either. The 44 suddenly concretized something that had been diffuse before. At last there is a value for his condition. In this context, the 44 stands for a form of unhappiness that does not yet describe depression, but is not particularly happy either.

This is where the research begins. Benjamin wants to find out what it means to become 100 points happy. To do this, he uses the app's bootcamp as well as other digital tools and guides, such as the digital penguin therapist WYSA. What they all have in common is that they constantly query his state of mind and want to improve his emotional situation. Benjamin is hackable. At the end there are 100 points. But is that even intended - final satisfaction? After all, in a consumer society, full satisfaction would mean standstill. After all, every product assumes that one is not yet perfect enough and always promises even more optimization of one's own attitude to life. Is it even possible to become happy? Then 100 points would be the total system fuck, because one needs nothing new more. At the same time, however, it would be completely presumptuous to be unhappy because of one's own many privileges. After all, this system and our attitude to life causes much more suffering in the world than we ourselves would ever have known. Is it not rather a political obligation to be unhappy? Maybe the 44 is also a refusal against the injustice of our system. Perhaps one does not have to become a 100 but a 0 - the systemic total failure. Whatever the case, the research is far from complete. It has so far led Benjamin through two lockdowns, strange therapy bots and support announcements, through a disturbingly calming digital natural landscape, and other many considerations and strange circumstances.

At Tatwerk, Benjamin Burger presents a first showing based on his research so far in the form of a video lecture performance.

Benjamin Burger is an interdisciplinary artist. He works in Zurich and Berlin at the intersection of theater, performance and design. He is the founder of the production Extraleben and works in cooperation with other artists* or solo. With his work he explores the pathologies of hypercapitalism.
»It is easier to imagine the end of the world than the end of capitalism.« The statement aptly describes a society that perceives its circumstances as having no alternative. Along with this omnipresent fatalistic attitude towards life, which Mark Fisher calls »Capitalist Realism«, Benjamin asks himself in his artistic works to what extent breaking out of the system is still possible at all. He assumes a general state of exhaustion in our meritocracy, which for him is symptomatic of the exploitative practice that underlies this system. The collapse is not only constantly threatening psychologically (burn out, despression, psychoses) but also the ecosystem is on the verge of exhaustion. Based on this, Benjamin places an emphasis on the psychological consequences of climate catastrophe. The climate crisis may represent the ultimate trauma to our society, for with it the narrative of infinite fitness and value creation begins to crumble. One must radically renegotiate what it means to be human on this planet. To this end, Benjamin conceives of art and theater as a speculative space for thought. In his current research »Happy Points« Benjamin investigates whether a different understanding of happiness is not also necessary for social change.
www.benjaminburger.ch