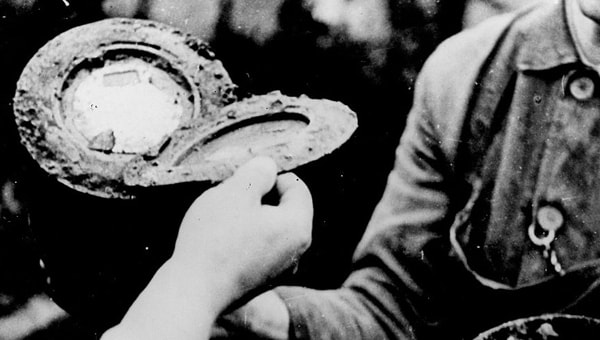 The artistic action consists in returning to sender a cinerary urn hailing from a nazi lager and sent to the then called Adriatisches Küstenland.

The region Friuli Venezia Giulia together with Slovenia and Istria was the Adriatisches Küstenland from 10th September 1943 to beginning of May 1945. The residents of those territories have been real citizens of the German Reich.
Silvano Cosolo, in his book »Berlino e Dintorni«, wrote about an episode which lets emerge a tangible meaning of being at that time citizens of the Nazi-Germany: urns containing ashes of relatives, who died of »accident or illness« while »working abroad«, were sent directly home. This »privilege« did not concern citizens of the Republic of Salò and those living in other territoryies occupied by the Nazi.

In Berlin-Wittenau there was the Italiener Lager, where Cosolo, together with other fellow citizens of him, was confined up until the end of the war.
The urn will be brought back to that place.

Sevdah is a musical genre from Bosnia and Herzegovina, beautiful tapestry interwoven with love songs, songs of longing, unrequited love and love sickness. Black bile, in greek melaina chole (µέλαινα χολή), is a body humour that provokes feelings of sadness when dominant in human body. Transposed in arabic, becomes سَوْدَاء ‎sawdāʾ; in turkish, it is sevda - meaning love; in portuguese saudade - feeling of missing someone. Sevdah travelled first with arabic, then Ottoman conquest to clash with south slavic culture of Balkans, settling in Bosnia. And there grows the fertile fruit of sevdah, sad, yet poignant music. Meanwhile, kara in turkish means black.

DobiArtEventi (DAE) is an international multimedia art and music festival. Performances, concerts, site-specific installations, interventions in public space, an exhibition of visual and video art are the different artistic languages composing it. Artistic research and experimentation directed towards the intersection, overlapping and contamination between arts and other manufacturing activities are the characteristics of the festival.
Differently from the previous editions which have been always presented in the headquarters of Bilabial (the association organizing DAE) during one summer week, this year the single events take place in many locations around the Italian region Friuli Venetian Julia, in Berlin (TATWERK) and Slovenia (Marino) during over a month.