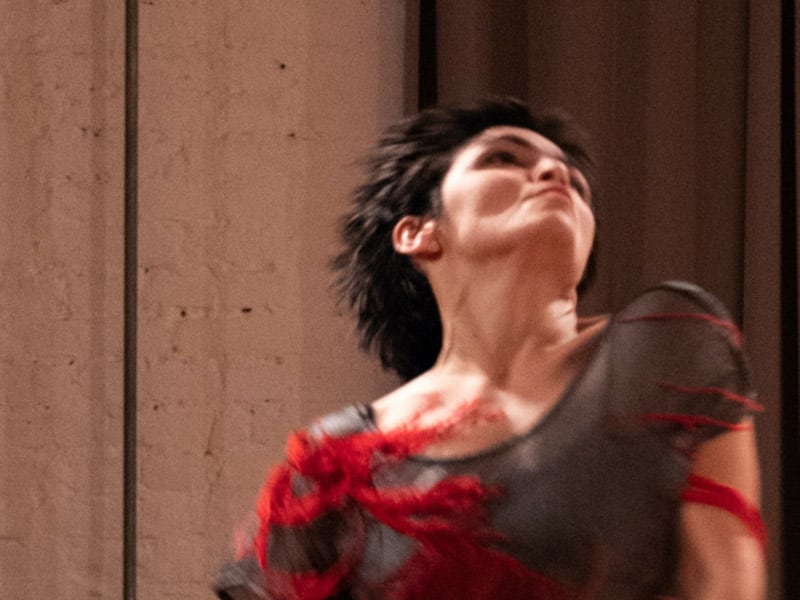 »Somehow Standing« is a performance about a body in transit, in transition, in trance. A body in transit is a subversive body. In its oscillating existence, almost always at the edge of the abyss, this body emerges continuously like a Phoenix from the dust. It creates and lives under its own rules, reinventing itself continuously, experiencing new ways of presence and absence, opening its awareness towards the space and the others, dialoguing differently with gravity, walking, falling and getting up, finding again its own breath, looking for new sources of energy, but never giving up.

The piece uses the concept of instability as a generative bodily performance practice that opens space to moments of crisis, of release, into the unknown, to being fully present. It reflects upon our capacity for strength and empowerment to deal with life in times of turbulence and despair. Looking at the current situation around the world we may ask: How do we deal with the unexpected, with the limits dictated by society, with fear? Are we designed to live in a stable way? How can instability become a source for living? How can we move away from a homogeneous controlled narrowing idea of being and instead set off for existing in a more refined sense of instability: living and evolving, unfinished, open, human and other, all at once, in the energy spirals of the universe, where identities disintegrate, mingle, disappear and then reform, reappear?

Regarding these questions and ideas, the musician and performer create a fluctuant/fluid dialogue where the performance evolves in encounters and departures, instants of dissolution and concentration, moments of absence and fulfillment and leaves space for the appearance of unpredictable events and encounters with the audience. Every possible end is a new chance to continue, every possible fall is a chance to move forward. Forward, back, forward, in maybe a new way. Somehow... standing... 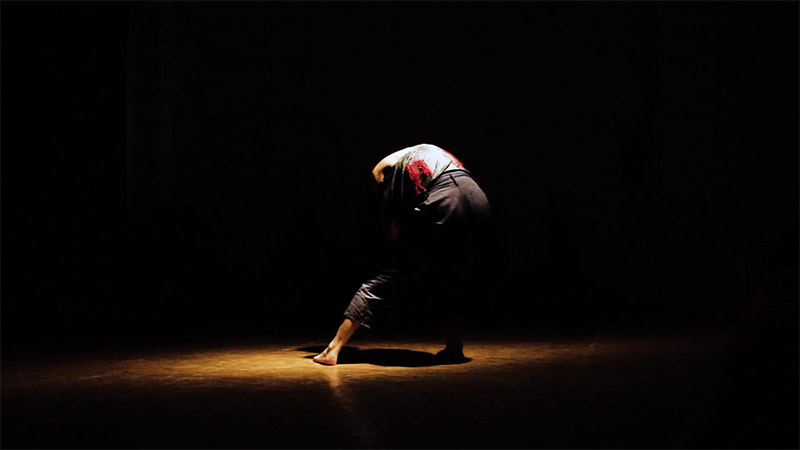 Born in Havana, Cuba, Ana Kavalis is a performer, dancer, actress, and educator based in Berlin since 2004. In Cuba she studied modern dance with teachers such as Tangin Fong, Manolo Vasquez and Narciso Medina. In 1996 she emigrated to Montevideo, Uruguay, where she studies drama at the E.M.A.D. graduating in 2000. In 2001 she take part of the CPTzinho at the CPT (Theater Research Center) in Sao Paulo, Brazil, where she learn the actors method developed by the director Antunes Filho. In Berlin, she collaborated with several independent theater and dance groups. The long collaboration with the Djalma Primordial Science group (lead by Ephia Gburek and Jeff Gburek), significantly influenced her personal work. Her solo Performances such as Eurydike - eine Anatomie des Schattens (2006/2007), Penthesilea (2009), Lilith im Spiegel (2010/2011), Das Meer hinter der Mauer (2012), Qui se cache dans ce corps? (2016/2017), Lilith´s Pomegranate (2019) and lately Somehow standing (2019/2020) have been presented in different festivals around the world and in Berlin. In her work she mixes various techniques and practices such as butoh dance, physical theater, improvisation, Kundalini yoga, meditation, somatic bodywork, and witchcraft. She explores the embodiment of sound and music and the connection between language and movement, to create a kind of "anatomy of language". An important aspect of her performance is to create another reality for the audience that transform them both physically, spiritually, and energetically. She leads The resonant body Training and offer Workshops in collaboration with Jeff Gburek. Since 2019 she is part of the women collective performance group The Psychedelic Choir lead by Zorka Wollny. She is the mother of a 7-year-old girl.
www.anakavalis.com

Jeff Gburek is a multi-instrumentalist, sound designer & composer who has performed throughout Europe and the USA. He uses prepared guitars, radios, magnetic field antennae, theremin, manipulation of organic objects, sound automatons & special microphones to bridge formal music & environmental sound sources, bringing multiple dimensions of sound into consciousness. He worked with butoh dancer Ephia and studied with Min Tanaka and Kazuo Ohno and built his own gamelan mini orchestra after traveling in Java and Bali. He has collaborated with musicians such as Tetuzi Akiyama, Pascal Batttus & Keith Rowe of AMM. He has performed at Unidram Festival in Potsdam, Ad Libitem Festival in Warsaw, FRIV Festival in Poznan, Festiwal Muzykofilia, Torun and was commissioned in 2020 by Radiophrenia Glasgow to present a retrospective of his work with shortwave radios. His interests orbit around improvised music, indeterminacy, acoustic ecology, field recording & gaian cybernetics.
transparent-abelard.blogspot.com