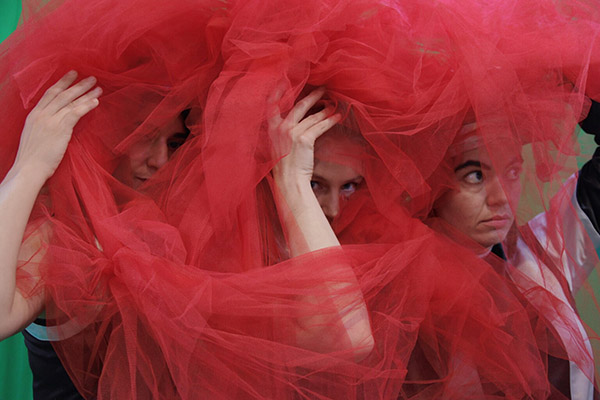 Who do we remember? Who or what decides whose life and art is remembered? Why do artists disappear from the collective memory? Against this forgetting, Frl. Wunder AG staged a revue in honor of historical stage artists. For this, they slipped into the cloaks of the »Furies of Memory«, goddesses of revenge with an indestructible memory. One question remained: who actually made the artists' work possible and inspired it? As a performance collective, Frl. Wunder AG knows that art is a collaborative process. Friendships and support systems are a prerequisite for artistic creation. History is only made by those who have Lobe networks. It's high time to commission the »Furies of Memory« again! The goal of their investigation: tracking down encounters that were decisive in determining whose traces we still find today.

Three performers invite their audience into an encounter space full of objects and scenic memories of historical visionaries* of performance: they reenact rehearsals and performances or search through letters and diaries of dance innovator and light design founder Loïe Fuller, interdisciplinary Dadaist Elsa von Freytag-Loringhoven, political theater maker Asja Lācis, and dance and performance pioneer Valeska Gert. They uncover the networks behind the individuals and, together with the audience, spin a web of memory that also carries the circles around artists* into the future.

Supported by Fonds Darstellende Künste with funds from the Federal Government Commissioner for Culture and the Media as part of NEUSTART KULTUR.