Gli altri (The others) لخرین

An audition. An actor alone in a western scene. He rehearses, sings, trains. He rehearses the role of the hero. But the role isn't written for him. 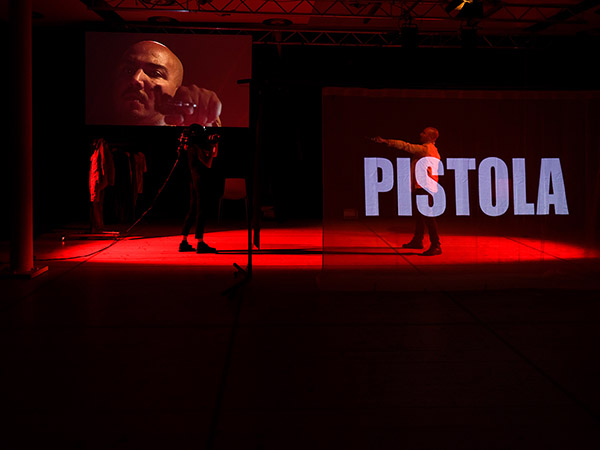 You don’t need to be a voice for a voiceless. Just pass the mic.
Su’ad Abdul Khabeer

»Gli altri« لخرین is an acid dialogue, a light and ironic work on the perception of the Other, a revealed scenic device that moves in a hybrid territory: banal, vulgar and direct images and songs alternates with stories rooted in the depths of our western mentality and identity. An irreverent game about colonial heritage that reverberates our tradition and our contemporary scene.
In subtle balance between fiction and reality, »Gli altri« لخرین exposes the device of power that underlies the orientalist representation of the Other starting from the representation par excellence, the scenic fiction, which helps to create and strengthen the narratives of the
present through the insertion of another body, of a presence that exposes itself to the public, trying to adapt to a representation always crooked, never adherent, always wrong. A voice-over comments, gives instructions, remembers limits and modalities of its pre- feeling in front of us, the audience, the first recipient of the representation and an integral part of the game.
In a succession of auditions that cross several spectacular genres, from cinema to docu-fiction, passing through classical theatre and advertising, »Gli altri« لخرین reveals the machine of representation and identity creation: an exploded set that exposes itself to the public, a founding witness and dramaturgical element of this performative work that actively participates in the construction of the final narrative.
Thanks to a device that mixes fiction and reality, autobiography and bio-fiction, testimony and invention, »Gli altri« لخرین wants to reveal the colonial paternalism hidden in our societies and, at the same time, reaffirm the right to its necessary presence on stage.

Streaming within »Between Us«:
June 6th 2021 | 8:30 pm
TATWERK | Berlin / On Twitch
Italian with English subtitles

Corps Citoyen is a multidisciplinary artistic collective based between Tunis and Milan. The practice of the collective is composed of dif- ferent disciplinary tools (dance, theatre, poetry, video, animation, writing and anthropological research) to create new contemporary nar- ratives. The aim of the group is to strengthen the values of citizenship through artistic practice, training, research and active participa- tion of civil society in order to promote political and social change. Corps Citoyen because the main objective of the group is to activate social reflection through the expressive potential of art and the body in particular, territory of a biopolitical battle and space for creative resistance. Corps Citoyen is a collective platform, where shared and multidisciplinary projects, as well as individual works of the group's artists in collaboration with other artists* and professionals, find their home.